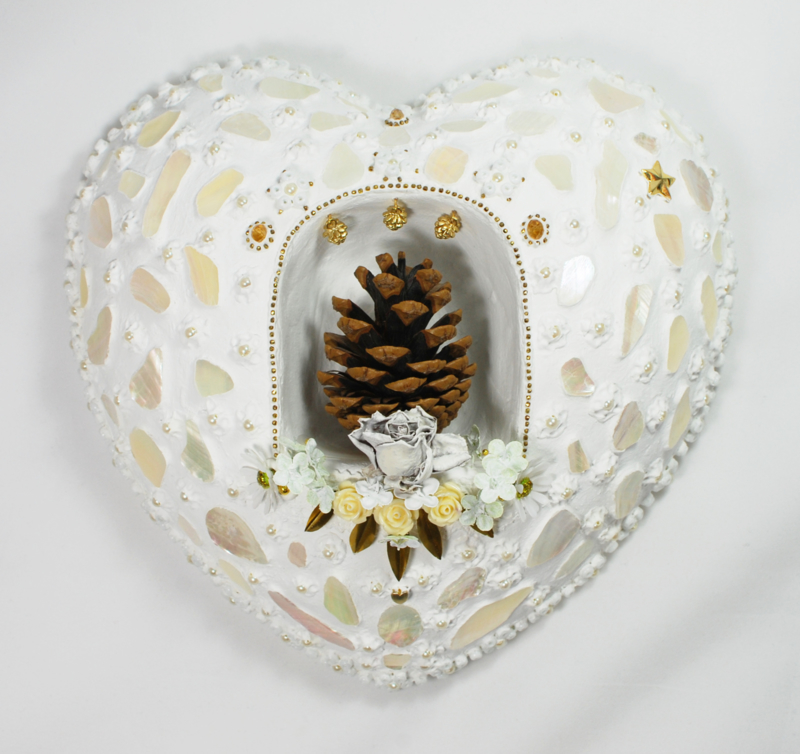 This was a special assignment. With the things that I received and the story behind it, I went to work. In accordance, I can also tell the story.

The client is a mother with 3 beautiful healthy children, girls and a sweet man. After the eldest daughter, she was forced to break off a pregnancy. From the cemetery, the eldest daughter, like many children - without having to think about - found and took something, namely a pine cone. Together with the hospital band, this pine cone is the only touchable thing that remains and has suddenly become something very dear to an ordinary pine cone.

After that the mother received 2 beautiful daughters but untill this day a silent need remained to give a physical spot to the family that does not consist of 5 but actually 6 people.

The real pine cone symbolizes the deceased daughter, the 3 golden coloured pine cones hanging on the top stand for the other 3 daughters. The rose comes from the marriage corsage of the parents. Behind the rose, under the pine cone, the hospital band is attached. The pine cone is loose and can be removed.

All in all, this is a special, light and colourful heart. Colourful because of the mother-of-pearl that subtly reflects all the colours of the rainbow.

I am grateful that I could do this assignment.